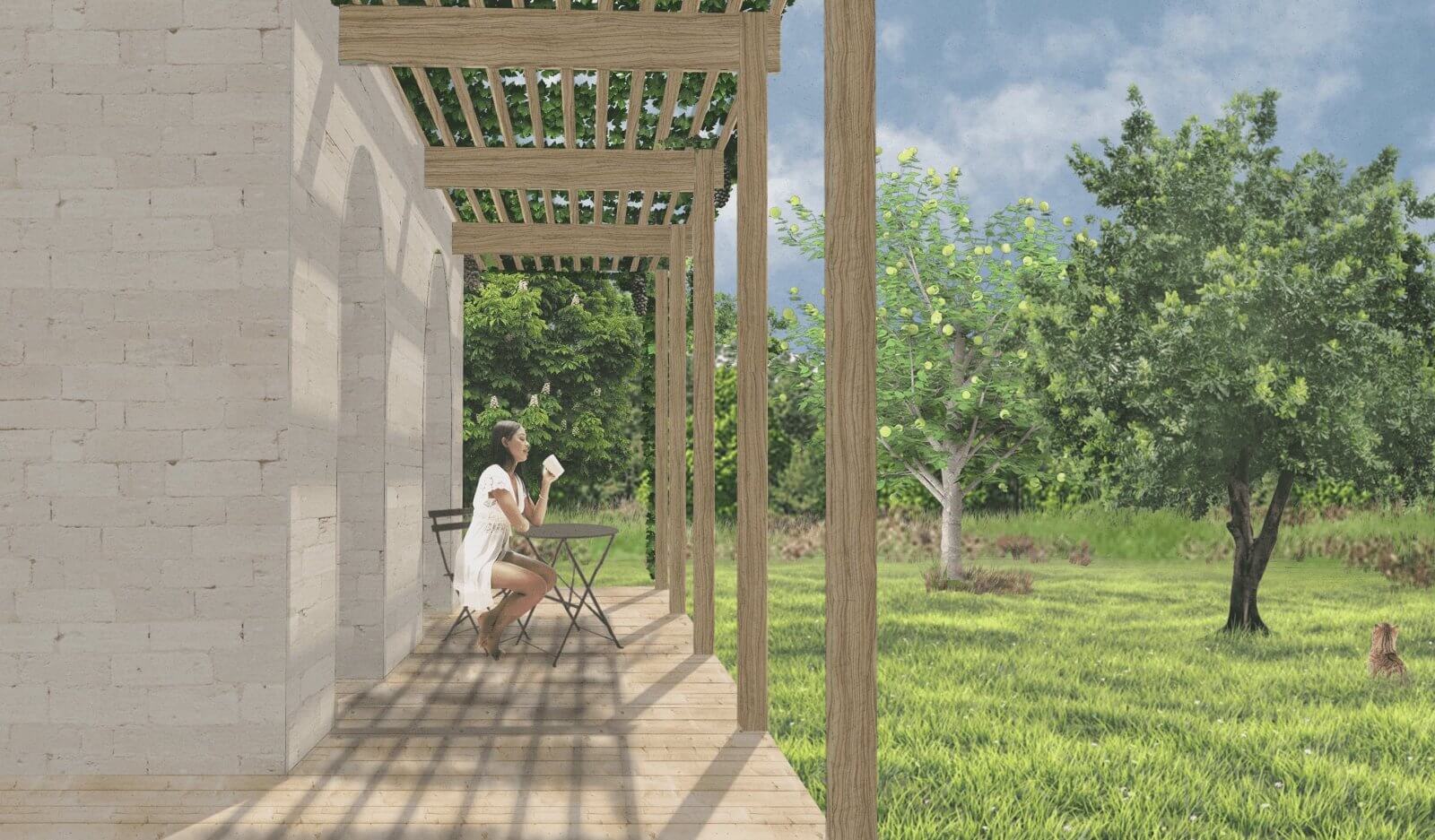 The porch surrounding the house

A project for the sanity of human connection through the enhancement of local heritage of the sacred act of cooking.

The French pavillon houses spread like white fungus. The pavillon is an individual house usually built as cheap as possible, in rural or suburban area. There are built in batch, all coming from the same model repeated in area only dedicated to housing. We find them as far as the eye can see all over the territory.

Beyond the standardization they generate, they distance us physically and mentally from our direct environment, due to their design. We live next to each other rather than with each other. The car is king, so the activity on a pedestrian scale is missing. As a result the nearby local life is just as nonexistent. This observation is global and can be applied to other types of situation. It impacts our way of living and considering our neighbors, and by extension the local life which vanishes in the French countryside. Through my project, I want to invite people to reconsider their everyday life and to consider their neighbors by developing a sense of mutual aid.

I am convinced that a more united life is not at odds with our current way of life. In fact, humans have lived mainly in community. It is often a lost state of mind rather than a problem of compatibility with our contemporary way of living. The project is sets in France, where I grew up. Also where many pavillons have been and continue to be built nowadays. It proposes to reconnect people with the one around them through their daily life. To do so, I question the usual housing by revaluing the local culture.

Have you ever attended one of these endless family meals that start around noon and which we are still waiting for the end? Where we see the sacred stages of the French meal follow one another?

In France, cooking and meals have always been an important and symbolic reason for gathering. At all levels of society: from French gastronomy to family Sunday meals. In my project I use this axis to put the kitchen at the center of interactions, by developing typologies of houses highlighting a scenario with the kitchen as the center. Several household profiles are gathered around the same kitchen, for an intergenerational space.

From the growing of vegetables in the garden to the pot, and finally the meal all together, the program is set. To interact around this kitchen, the houses are closely connected to the garden. The gardens of the houses on site is considered as one here. There are no fences, but different levels of vegetation density. The pavillons grid is being abolished. It is a way to change our individualistic way of living, to shake up current habits and to place local life at the center, around a heritage that brings everyone together.

Thesis
The world of French pavillon

France has evolved and changed extremely quickly in the last decades. With the contemporary context, the change in society, the impending ecological catastrophe, I look towards, through architecture, what can be a good representation of where we are now : the pavillons.

Is it a consequence or one of the causes of our current situation ? Maybe a bit of both. But for sure it is the type of dwelling most present on the territory. It could be perceived as the innocent answer to a request of the average French citizen, to propose to him a way to extricate himself or to free himself from his social class. The reality is that this type of dwelling loose value through time.

But it has also forged, or at least participated, through its massive replication a way of thinking, a way of acting and interacting with others, a way of consuming. Through my paper, I attempt to understand and transmit the consequences of these pavillons zone that are still very current today.