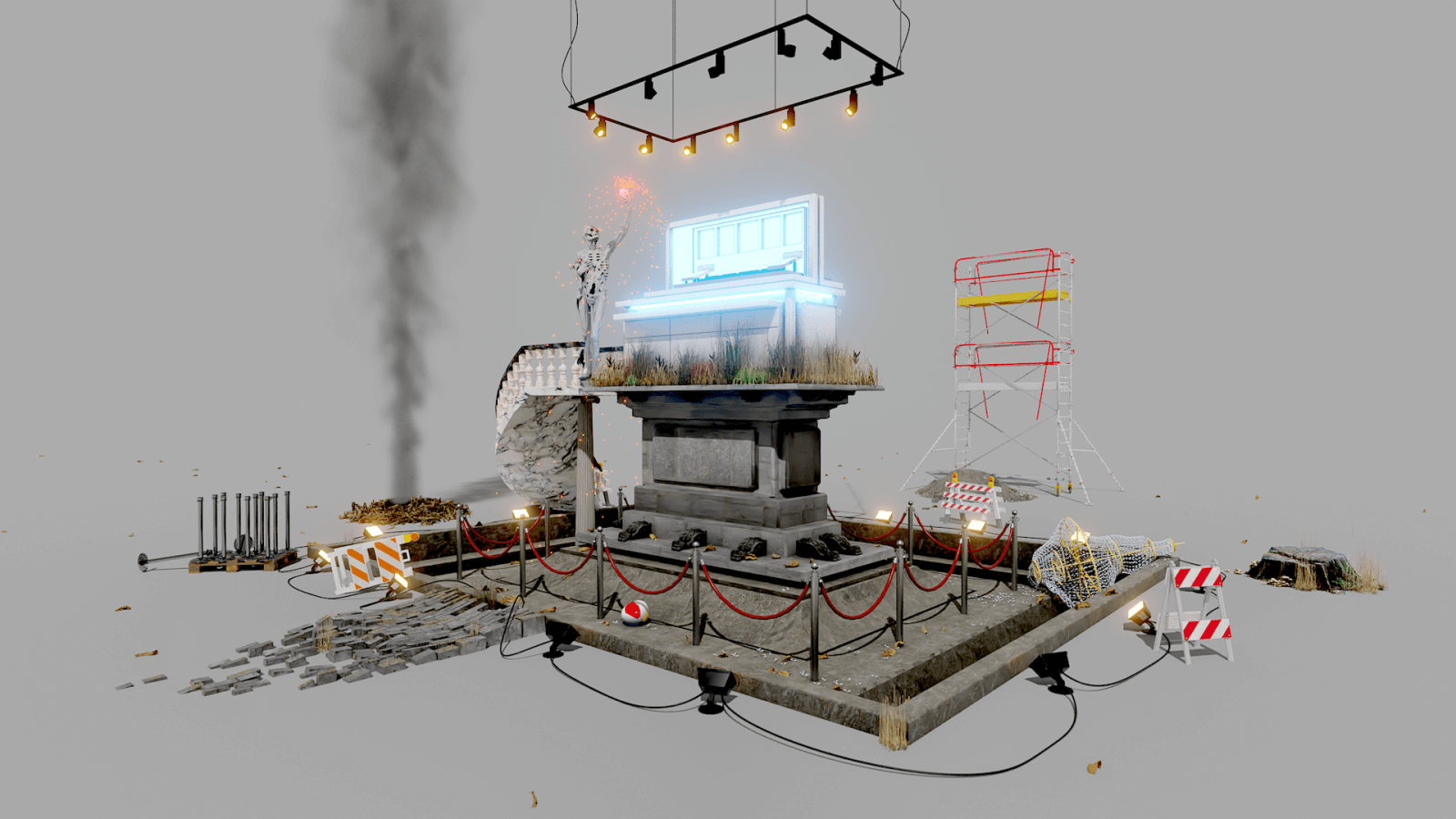 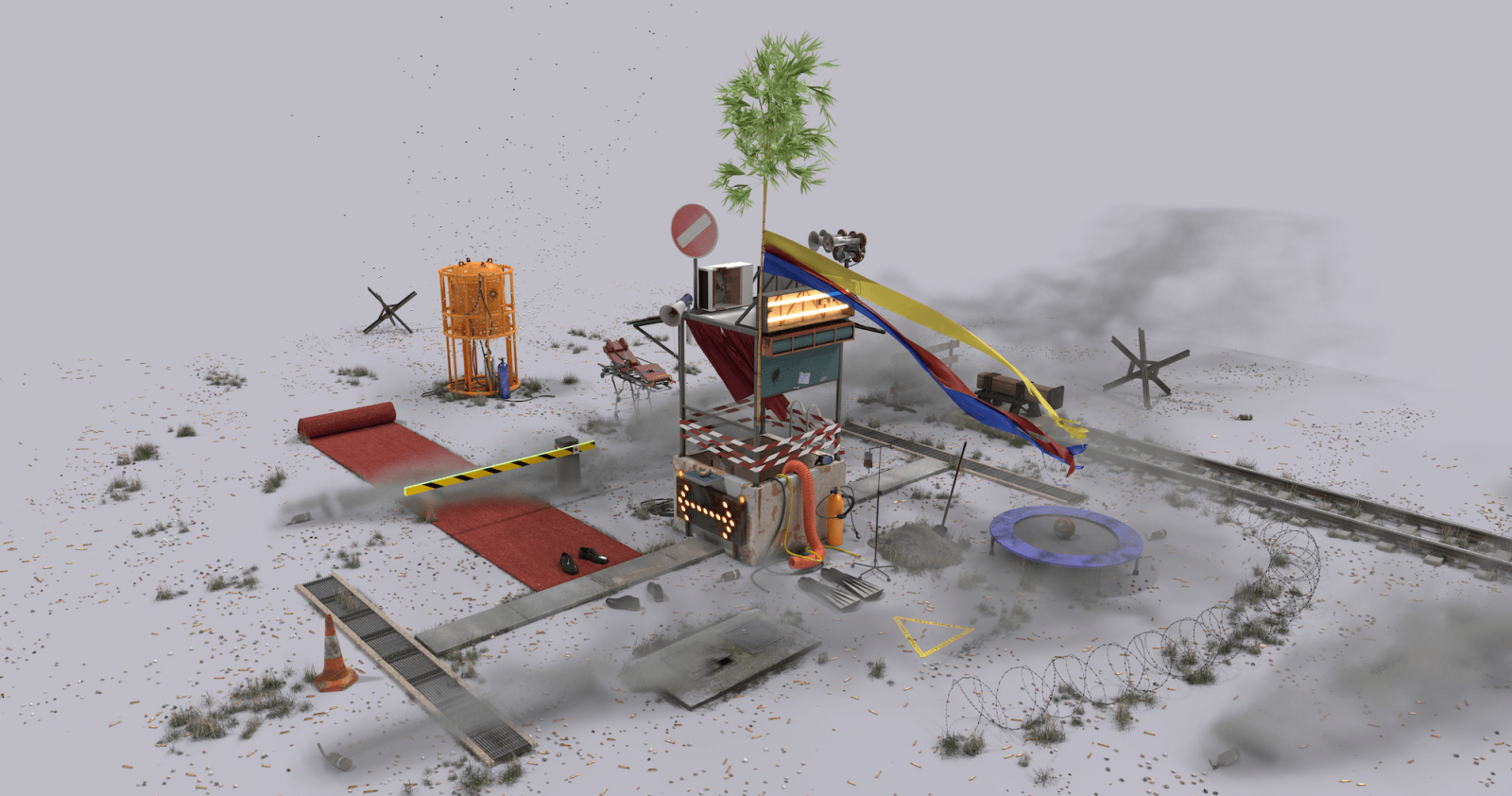 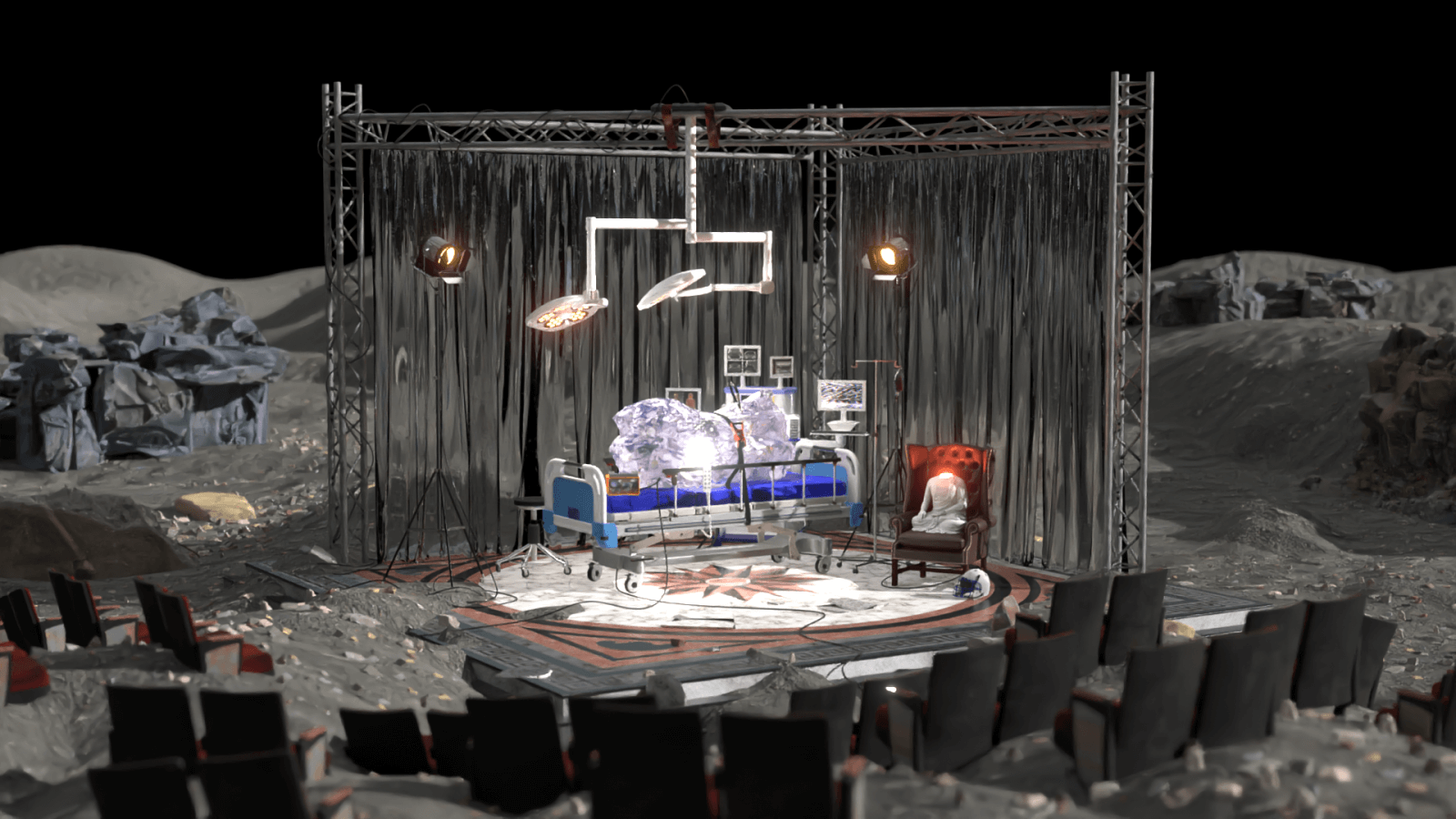 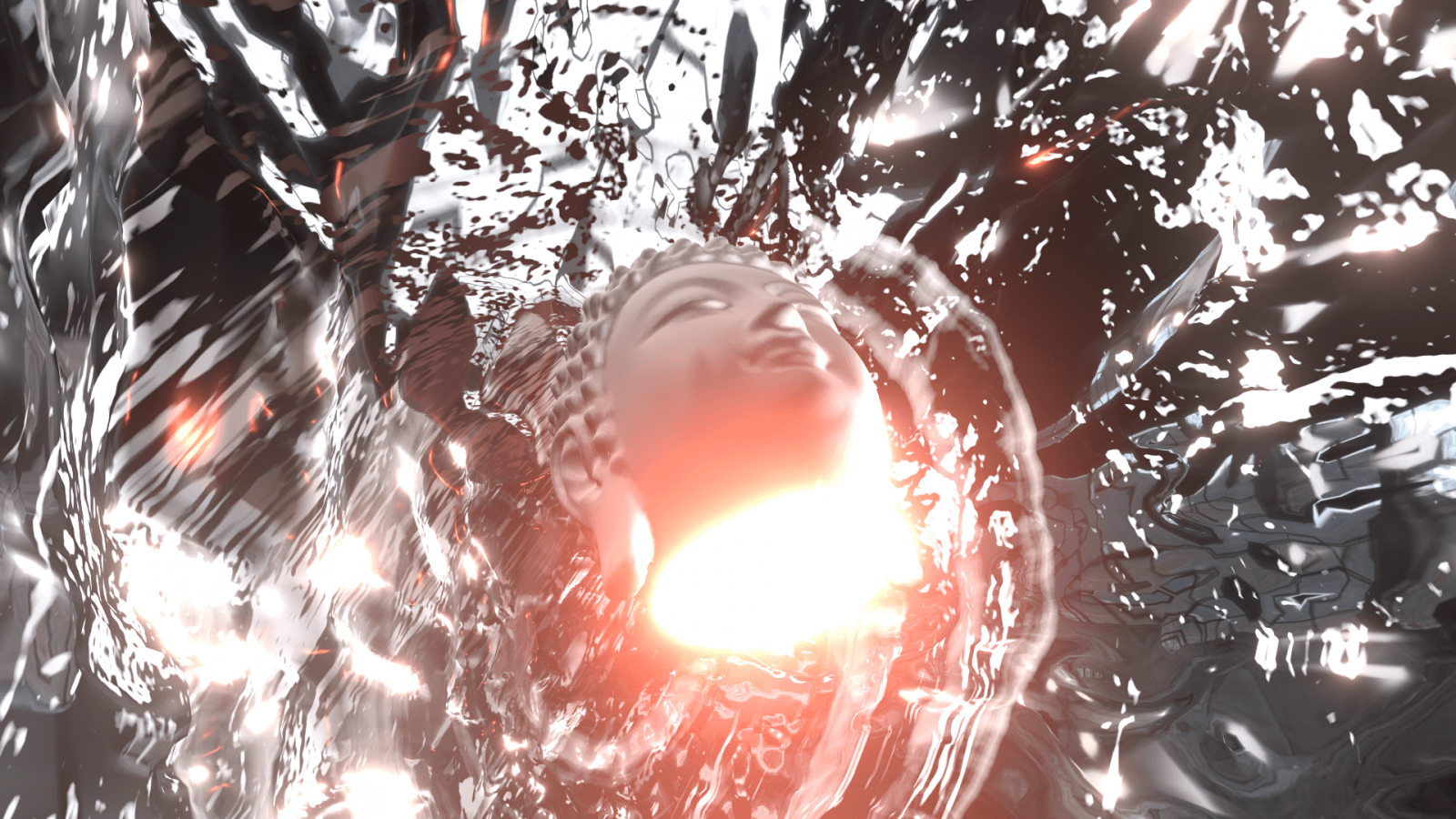 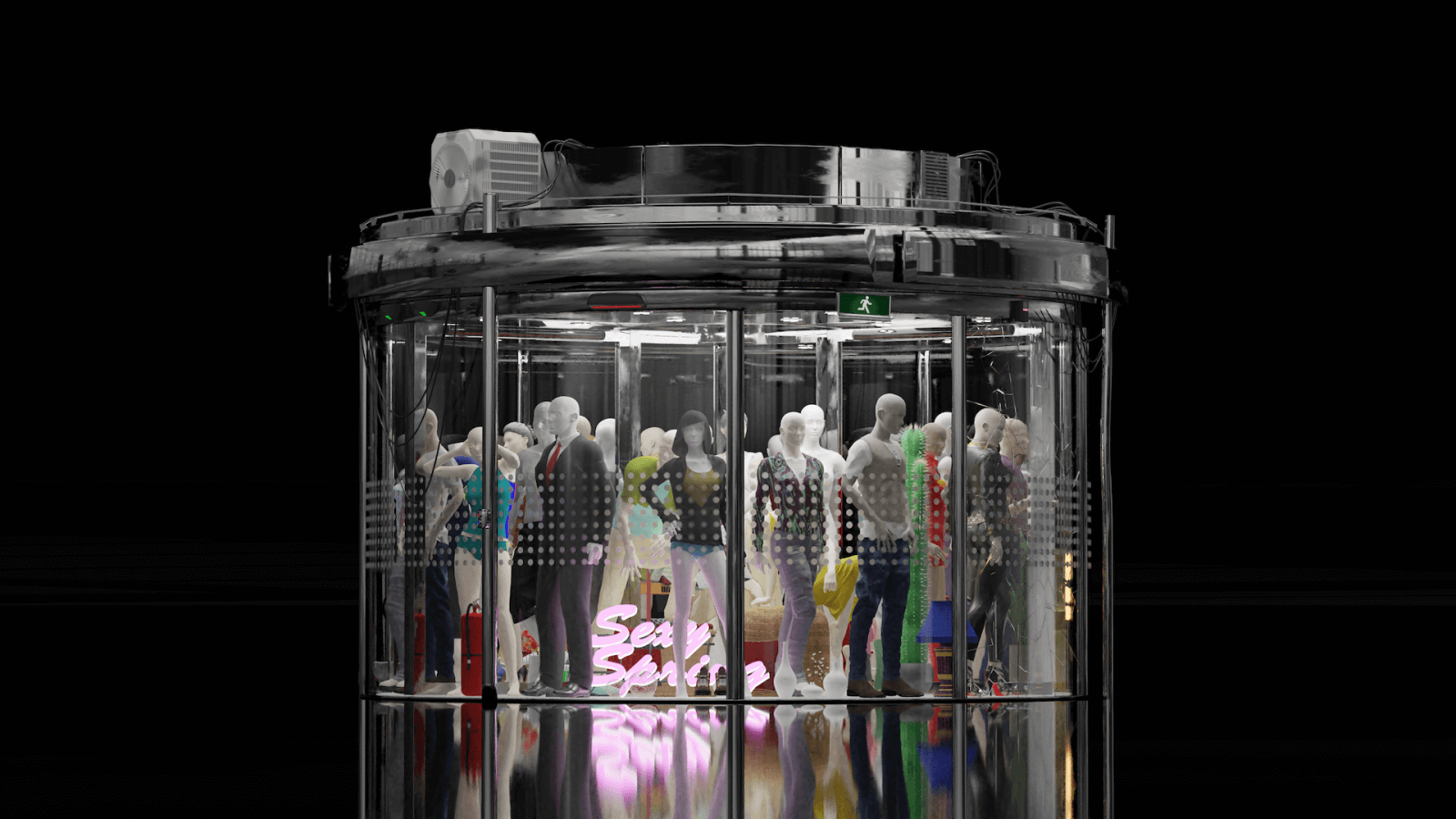 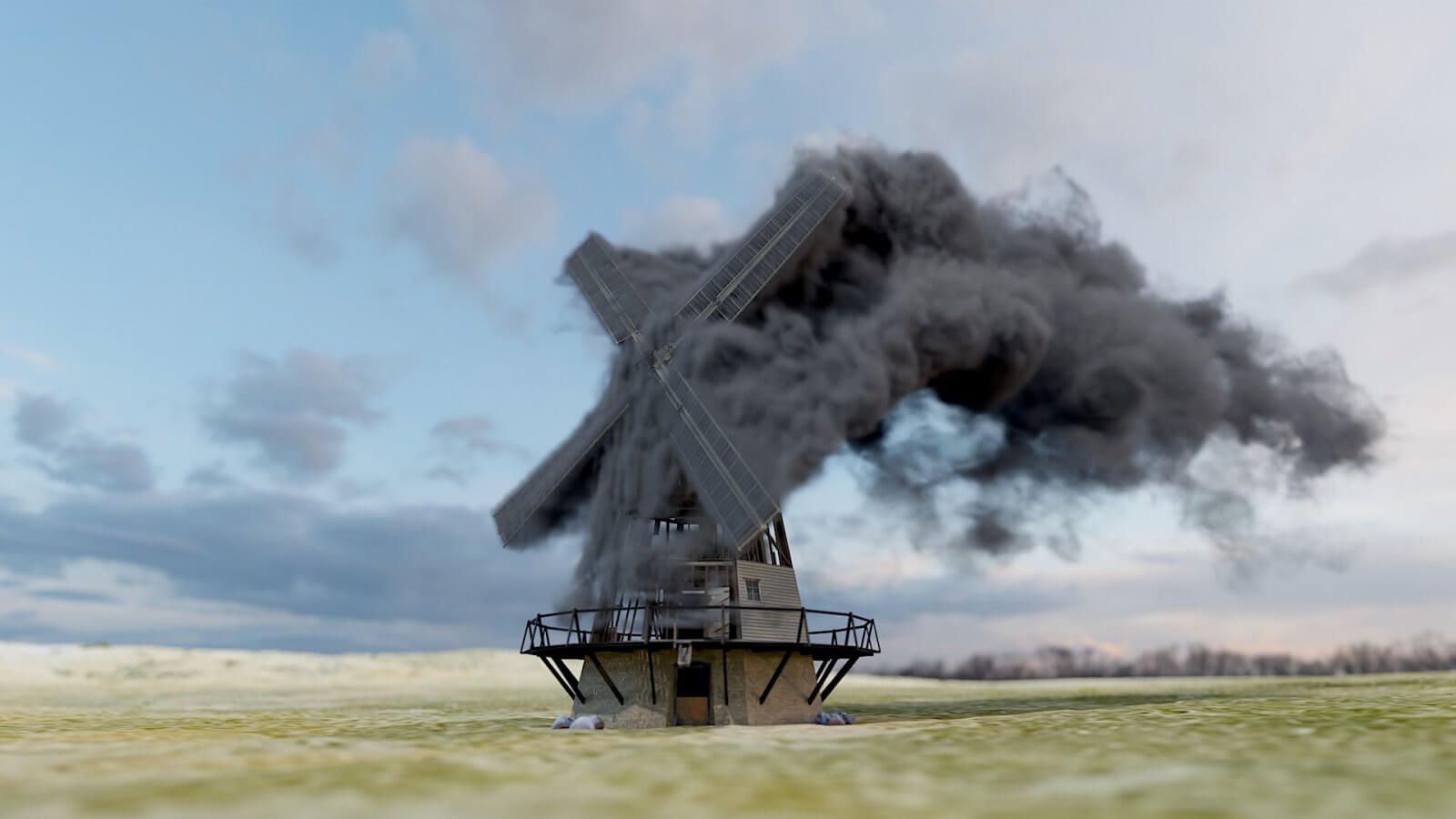 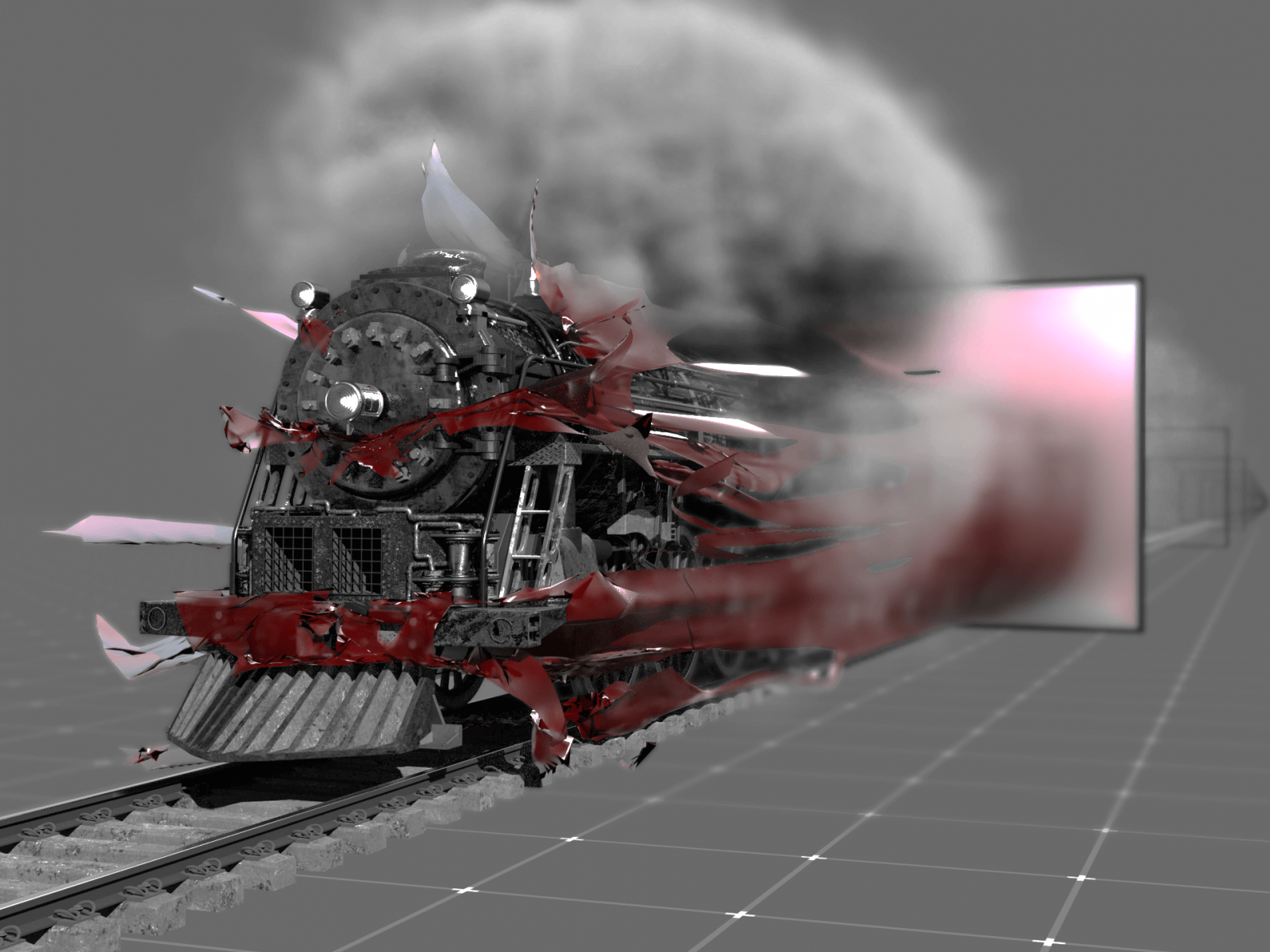 The aspect of Capitalism as Religion in a post-modern society is my artistic research subject. It was already discussed by Walter Benjamin 100years ago, but my focusing points are the Religious aspect of Post-Capitalism in Virtual Space. Especially, I have fascinated in commercial urban space like a shopping mall, department store, Facade structure as a relation from the Catholic Church and European Cultural Heritages. For this subject, I use computer-generated 3D animation and reveal the over-saturated capitalistic infrastructures as hell scenery. It creates a realistic but fabricated cinematograph. My work is driven by the giant three questions. The first, how commodity capitalism in the actual world conspires with past religions? The second is how capitalistic ritual is present in daily life? Third, how does capitalism appropriate human desires in a virtual space? The whole research is a dialectic compose of Actual, Ritual, Virtual. The ritualistic objects, instruments, apparatus, and gestures that constantly evolving in the post capitalistic paradigm exist transparently between social structure and system. The ritual evokes the unconsciousness of the act in our life, but it has strongly connected to the huge capitalistic ideology. This ritualistic structure has embedded in civil engineering, architecture, commercial network, logistics, interior atmosphere, internet, virtual realism. This paradigm can be called a giant transition that semiotic value of object goes beyond the value of use, and value of exchange, but it acquires ritualistic value. Today, we can easily watch that one simple commercial object can become a high ritual object, especially in the luxury department store. In this transition of the present day, capitalism even performs a religious role in a non-religious way. If the past religion plays a role of calming anxiety, worry and pain under the name of God, but today's capital makes humans as endlessly desire, possess, oblivion exists.

Every mass-produced daily life objects are the linguistic container for ideologies and cultural-political idea. Every single objects that originated from conveyor belt production system are also represented by 3D-scanned in the digital world for game and cinema industries. At this point, Jaehun is engaging the aspect of Capitalism as Religion in a post-modern society using this fabricated virtual object. Especially he keeps asking how the ritual system for human desire exists in this capital-driven world. He uses this digitally generated and scanned object for reflection of the abandoned landscape after the war, post-apocalypse, and hell scenery. Especially, he fascinated in commercial urban space like a shopping mall, department store, Facade structure as a relation from the Catholic Church and European Cultural Heritages as a symbol of ritual and spiritual structure. For him, every single object is a linguistic container for ideologies and cultural-political context as mystical allegories like Baroque Painting. He creates a realistic but fabricated cinematograph. The whole research is a dialectic compose of Actual, Ritual, Virtual. The ritual evokes the unconsciousness behavior in our life and this ritualistic structure has embedded in civil engineering, architecture, commercial network, logistics, interior atmosphere, internet, virtual realism.

As an artist who explores his views on the world through his works, the thesis attempts to provide a broad perspective on social phenomena that are difficult to convey in visual language. This thesis is not a description of the work itself, but a story about the negative space of the work: about social background, phenomenon, and premise. The thesis consists of 10 chapters that are constructed of three giant columns organically. The first big pillar is how does commodity capitalism in the actual world conspires with past religions? The second is how are capitalist rituals present in the modern world? Third, how does capitalism appropriate and create human desires and anxiety in a virtual space? It will be a process of answering questions. Therefore, the whole story is a dialectic composition of actual, ritual, and virtual, which means you could start reading from any chapter. The thesis that had the most profound influence on this article was Walter Benjamin’s “capitalism as a religion,” written in 1921. Because the last 100 years have seen the most change (progression or regression) in the shortest time on earth throughout human history, I wanted to write the 2020 version of capitalism as a religion. I will discuss with a variety of case studies the religious aspect of capitalism. It had only been left with "rituals without a dogma" that insight by Benjamin in 100 years ago. His insight has been inherited and also appropriated in today’s fourth Industrial Revolution signified by the digital age. It seems that in commodity capitalism, the concept of heaven and hell - which was clearly manifested in Christianity – has transfigured from a space in the afterlife into a real space. In particular, I will discuss how the digital technology of virtual reality, drawn by capital, breaks down the boundaries of heaven and hell and redefines the concept of Limbo.